Established by the Main Auto Supply Co., Indiana’s Most Powerful Broadcasting Station signed on for the first time on March 31, 1925.  More than 90 years later, the Grand Old Lady of Radio is still alive and well. 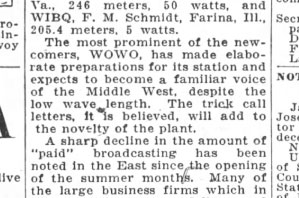 Over the next few weeks, we’ll release segments from the WOWO 90th Anniversary Special.  This is the introduction that sets up the entire special.

To the left is an article from the Oakland Tribute from June 27, 1925.  Even then they thought of us as more of a novelty than a station.

Check back every Monday for a new episode of the WOWO 90th Anniversary Special.