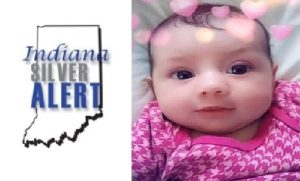 INDIANAPOLIS (Network Indiana): We’re in Day 2 of a statewide silver alert for a missing 8-month-old girl out of Indianapolis.

Amiah Robertson has been missing since last week. Family members who are looking for her have conflicting stories about her disappearance according to investigators. Amiah’s mother, Amber Robertson, reported her baby girl missing on Saturday.

Lyons was arrested over that “domestic dispute”, according to Amiah’s grandfather Chuck Robertson, who says his hopes of the child still being alive are “dwindling.”