FORT WAYNE, Ind. (WOWO): Fort Wayne Police along with the FBI are investigating after a bank robby Saturday morning. 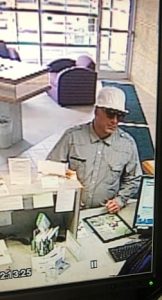 This was at the Partners First Credit Union just before noon at 6210 W. Jefferson Blvd. Police say a man (pictured on the left) in his mid-40s wearing a white baseball cap approached a teller and said he had a weapon and demanded money. After he was given an unknown amount of cash, he drove off in a pickup.

That truck, a white 2013 Chevrolet Silverado pictured above, was reported as stolen. It has the license plate TK691NJU with Browning Chapman written on the side of the vehicle.

Police are combing through surveillance video from nearby businesses.

If you have any information on the stolen truck or bank robbery, please call Fort Wayne Police.