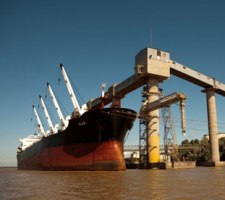 Officials from Russia and Ukraine signed a deal Friday to reopen grain exports from Ukraine’s Black Sea ports. Reuters says the deal should help ease the global food crisis. Officials from the United Nations expect the agreement will be fully operational in a few weeks and restore shipments to pre-war levels of five million tons per month. The deal will allow Ukraine to export the 22 million tons of grain and other agricultural products that have been stuck in the Black Sea ports due to Russia’s invasion. “A deal allowing grain to leave the Black Sea ports is nothing short of lifesaving for people across the world who are struggling to feed their families,” says Red Cross Director-General Robert Mardini. He also notes that prices for food staples have risen 187 percent in Sudan, 86 percent in Syria, 60 percent in Yemen, and 54 percent in Ethiopia over the past six months.