Our partners in news at ABC 21 say the manhunt continues in southwest Allen County. Deputies attempted to pull over Joshua Pritchard, who had a warrant out for his arrest. That’s when officials say Pritchard pulled over and fled on foot.

Lockouts have been lifted for Southwest Allen County Schools.

WOWO has received a text alert stating International Business College is no longer on lock-down. 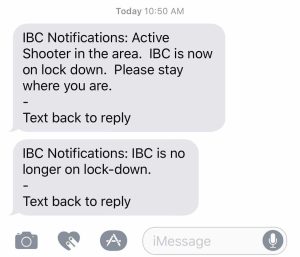 Authorities are looking for a person of interest outside of the International Business College on the southwest side of Fort Wayne.

County dispatch reported that someone was seen crawling around in the bushes outside of the college.

Two phone calls to the campus office resulted in, “We are a private college, we have nothing to report.” The second phone call also resulted in, “No comment,” followed by a hang-up.