We learned with heavy hearts that Bob Chase died today at the age of 90.

The WOWO Legend is known to almost everyone in Fort Wayne. For more than 60 years, Bob was the voice of the Komets, the spokesperson for Penny Pitch and a cornerstone to WOWO heritage and history.

Bob was born with the name Robert Donald Wallenstein in Neqaunne, Mich.  He later adopted his wife’s maiden name for his broadcasting career.

When he turned 17, he enlisted in the U.S. Navy where he worked as a cryptographer during World War II. In 1950, Bob married Muriel Chase. They went on to have four children.

He moved to Fort Wayne to accept a job at WOWO in 1953, and would continue employment until his retirement as Sports Director in 2009.

Through his time with the station, he would cover the biggest sports events in the area, including several Komets Hockey Championships, the Indy 500, IHSAA tournament basketball, college football and more.  He was also on hand for the famous Milan v.s. Muncie Central game that was the basis for the movie Hoosiers. 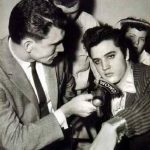 He would also interview many artists as part of the original Fabulous Four, including a young Elvis Presley.  With Westinghouse using WOWO as a test market, Bob became one of the earliest “Disc Jockeys” in the country as the station broke away from satellite programming in favor of playing their own music.

Last January, the Komets celebrated Bob’s 90th birthday where Mike “Doc” Emrick surprised Bob.  Chase has served as a mentor to Emrick, who is now considered the top announcer for the sport.

This season would have been Chase’s 64th straight year announcing Komets hockey for WOWO.

It’s @ThreeRiversFest parade time! Look for us up front with Bob Chase pic.twitter.com/UalvsJmDN5