The 1980’s was a time of transition for WOWO.  With Bob Sievers and Jack Underwood retired, and the passing of Jay Gould, the next few decades were… different. 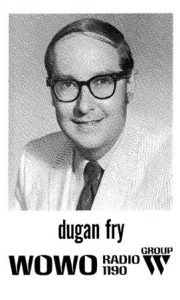 After Bob retired, Dugan Fry took over morning duties, and was later joined by Chris Roberts.  Dugan said there was no replacing Bob, “I think Bob was tired, but he would never admit it.  I think he knew also that as long as he wanted to be a part of it… he knew that whenever he wanted to do a little bit or more he was welcome.”

In 1988, WOWO returned to Fort Wayne’s “Original Oldies” station, playing the music that made it one of the top-rated radio stations in America in the 60’s.

And a year later, on August 7th 1989, we would see the end of the Little Red Barn as a weekday morning stable.  After nearly 50 years of feeding the chickens and hearing the roosters, the program became a special Sunday morning edition.

In 1994, the legacy of WOWO was in question after a sale to Inner City Broadcasting.  The 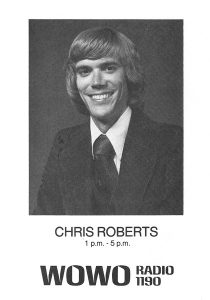 It was at this time that Federated Media came up with a solution, taking over the station and negotiating the night signal so it wouldn’t disappear.

By 1995, the WOWO studios move to new facilities at Federated Media’s Maples Road broadcast facilities on the southern edge of Fort Wayne.