Witsman was taken into custody at a Fremont home near Barton Lake.  He was booked into the Steuben County Jail on one count of probation violation and two counts of class D felony failure to register as a sex or violent offender.

Wistman is being held without bond pending an initial court appearance.

On March 27th, an arrest warrant was issued for 26-year-old Corey Witsman. Witsman was serving a term of probation for being convicted of class C felony sexual misconduct with a minor in 2013. He is also a registered sex offender, and his current whereabouts are unknown.

On investigation into Witsman’s alleged failure to register as a sex offender is ongoing by detectives and additional charges are being sought.

Witsman is described as a white man, standing about 5’10”, weighing 165 pounds, with hazel eyes, and auburn hair. He was last known to have a beard and mustache. Anyone with information on Witsman’s whereabouts is asked to contact the Steuben County Sheriff’s Office or Steuben County Crime Stoppers. 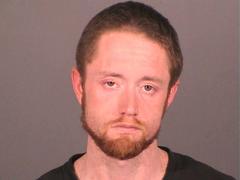