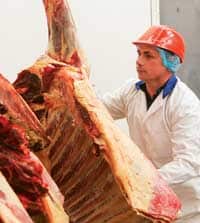 The European Union is preparing to allow more tariff-free U.S. beef into the region as part of an attempt to avoid a trade war. Politico says the move comes at the same time French President Emmanuel Macron (Ma-CRAHN) and German Chancellor Angela Merkel are making high-level diplomatic trips to Washington, D.C. Both leaders are trying to dissuade President Donald Trump from slapping tariffs on European steel and aluminum imports, set to begin on May first. An EU concession on American beef may go a long way toward appeasing the U.S. President, who’s made it clear that Europe has “unacceptable” barriers to trade. “Our farmers can’t send their product into the European Union as easily as they should,” Trump says, “and we accept their products. So, we have to make a change, and they understand that.” To make the change happen, the EU would have to alter a 2009 agreement which allowed the U.S. to export 45,000 tons of hormone-free beef without paying dues. European agriculture associations typically don’t favor more beef imports, but Politico says they seem to be supportive of tweaking the quota, especially if hormone-free beef stays on the banned list.