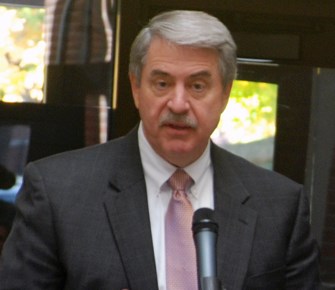 The National Association of State Departments of Agriculture announced that Former Indiana Ag Director, Ted McKinney is the organization’s new Chief Executive Officer. The group says he will lead NASDA in amplifying the voice of state departments of agriculture in Washington, D.C., seeking policy solutions for our food system, and expanding and deepening NASDA’s partnerships. “Representing a unified voice from all 50 states and four territories, NASDA is a leader and a problem solver on our nation’s most important agricultural issues,” McKinney says. “I’m honored to get chosen for the position, and I’m delighted to continue serving our country through advocating for state departments of agriculture. Moving forward, I’m excited to set new horizons for NASDA and ensure that agriculture thrives in our states and territories.” McKinney most recently was the USDA’s Undersecretary for Trade and Foreign Agricultural Affairs. He led the development and implementation of the department’s trade policy, facilitated foreign market access, and promoted opportunities for U.S. agriculture. “Mr. McKinney’s exceptional background reflects the spirit of NASDA’s ambition to unite state, federal, and industry leaders around the best solutions for farmers, ranchers, and communities they serve,” says Ryan Quarles, President of NASDA. “His advocacy experience will bring strength to NASDA’s federal partnerships.”