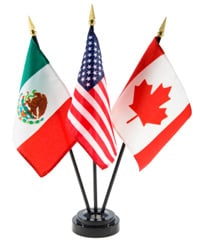 As the next round of negotiations regarding the North American Free Trade Agreement approach, the Office of the U.S. Trade Representative is considering submitting a “sunset” proposal. That’s a provision that would automatically cancel the deal five years after approval if the three countries don’t agree to renew it. The USTR began circulating the idea among federal agencies last week in anticipation of tabling the text during the third round of negotiations that start next weekend in Ottawa. At least two agencies, the U.S. Department of Agriculture and the State Department objected to the idea. A USDA official sent an email to the USTR office, saying, “Termination of NAFTA would be devastating for the U.S. agricultural economy and making such a termination automatic greatly increases the likelihood.” A source who had seen the email told Politico’s Morning Agriculture Report that the same USDA official said one of the biggest benefits of trade agreements are their certainty and “a sunset provision removes any such certainty and will significantly damage investment and trade.”