Fort Wayne, Ind. (WOWO): You walk into his chambers and see several models of ballparks, a Richard Petty model car, a life-sized cardboard cut out of Richard Petty, an autographed Rolling Stones CD with a picture of the band on the wall, a little sign on his desk that said “Though Shalt Not Whine” and a guitar pillow on his couch.  He would wear unique and colorful ties, some having the Rolling Stones and guitars on them.  He would wear a rainbow lanyard on his reading glasses.  He definitely liked to show off of the things that he liked.

Ken was a huge Richard Petty fan.  One year as a judge, his court reporter and my mother,  Pat Starr, arranged for him to have the Kyle Petty experience.  We went to the Michigan Motor Speedway with him to see him drive a Nascar.  He went into his small training class prior to driving and they gave everyone racing suits to wear.  Scheibenberger was a very tall man so they, unfortunately, didn’t have a one-piece suit that would fit him so they put him in a two-piece suit that was basically high water pants on him.  Then he had to try and get into the car. They aren’t like normal cars and open on the side.  So first he went in head first and when that didn’t work he went feet first, but that took awhile.  Even with all of the humor and difficulty, he had a great time.

He loved his family, his German heritage, music, playing guitar and joking around.  There was never a dull moment when Ken was around. He adored his wife,  He was a proud grandparent or as they call him,”Opa.”  All you had to do was look at his face when he was with his grandson, Jaeger, to know he loved that little boy more than life itself.  As one of the founders and the current President of Germanfest, you would see him tap the keg every year in his lederhosen.   His daughter Abby would help out with the festival serving beer.   He was also a founding member of the German Heritage Society and helped create the sister relationship with Gera, Germany. 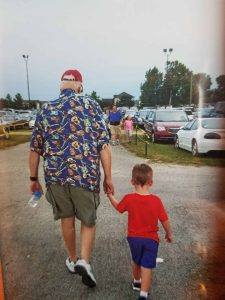 As a criminal judge in the Allen County Superior court, he started the Allen County Drug Court.  The first drug court to exist in Indiana.   His passion for helping out drug addicts was strong.  He believed that drug addicts would benefit from treatment rather than just incarceration.  He wanted an opportunity to help people with addiction problems, get them clean and help make them productive members of society.  They would go through the program and then they would hold a graduation.  It was an event and was extremely effective.  Rev. Bill McGill, a member the board of Allen County Community Corrections, which administers the home detention program and also played a part in the drug court said: “He was a great man, with a great treatment plan.”  McGill Assisted the drug court participants with various things, such a housing, spiritual programs, and counseling.  In 2007 his passion for addressing the area drug problem came full force after the death of his son Sam due to a drug overdose. 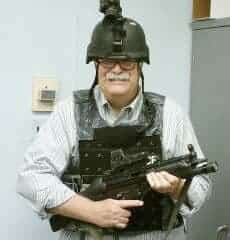 After leaving the Allen Superior Court, Sheibenberger went to work for the Fort Wayne Police Department as the Drug House Ordinance Coordinator for the Vice and Narcotics Division.  Although his time as a judge and working for the drug court was over, he wanted to still attack the local drug problem.  Captain Kevin Hunter, head of the Fort Wayne Police Departments Vice and Narcotics division said Scheibenberger “Felt strongly about being the drug house ordinance coordinator. He would help out any way he could.”  Hunter stated that Ken had a real passion for what he did.  He was “Good to work with, easy to talk to and could take a good ribbing.”  Anyone who knows Ken knows he loved to laugh.  He always made things interesting.  He had a very dry sense of humor.  One thing about him though, he could dish it out and he could take it.

Ken Scheibenberger may not be with us anymore, but his effect on our community will be remembered until the end of time.