INDIANAPOLIS (Inside Indiana Business) – Indiana’s pension system lost $200 million in two months after Russia invaded Ukraine in early 2022, according to its chief investment officer — but that’s loose change for a system with $45.8 billion in assets invested all over the world.

The bulk of the Indiana Public Retirement Fund System’s assets are invested in the United States, with the next-largest investments in the United Kingdom, Germany, China and Japan. It’s also got money parked in laissez-faire Hong Kong – subject of recent crackdowns by ruling China – and tax haven Cayman Islands.

Chief Investment Officer Scott Davis said the system diversifies across dozens of countries to minimize the financial impacts of any one country’s risks.  Less than 4% of the portfolio is invested in any one foreign country; about 70% of assets are invested in the U.S.

That’s how the system lost a sizable chunk of money, but not a large percentage of assets, from Russia’s invasion of Ukraine.

In January, before Russia’s initial February attack, the system had $266 million invested in Russia, Ukraine and Belarus, according to a slide deck from an October meeting of the Pension Management Oversight Committee. But by March, when system leaders told their external money managers to pull out of those countries, the value of those investments had dropped to $62 million. 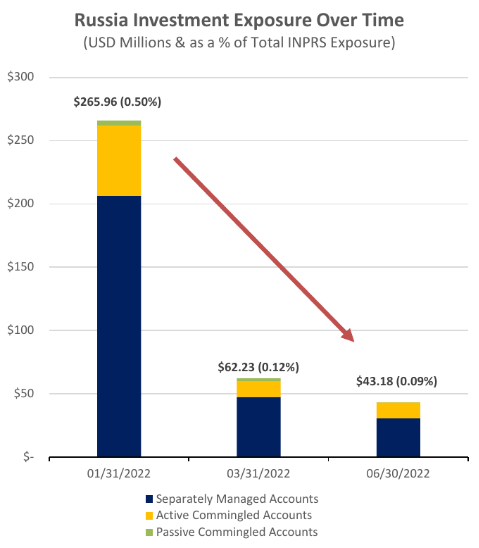 “A lot of this drop that you see here from January down to March was really just a matter of the losses within these markets, unfortunately,” Davis said.

By June, as Indiana divested from the three countries at the heart of the conflict and as economic conditions in them continued to deteriorate, the state had $43 million left in investments it couldn’t drop.

“The exposure you see here that’s left is really just securities that we can’t trade, [that] we still hold on our balance sheet,” Davis said. “So we just instruct the managers: as there’s liquidity, if the market’s open, go ahead and trade those securities to get out of them as soon as you can.”

But he wasn’t optimistic about the fate of those remaining investments.

“At this point, I’d almost count these as worthless in my mind, but hopefully, our managers can salvage at least some of these assets,” Davis said.

System leaders weren’t particularly worried about the impact of that financial turmoil, however, because those investments comprise such a small portion of the system’s total assets. The original $266 million, for example, was just half a percentage of the portfolio.

Still, Sen. David Niezgodski, ranking minority member on the Senate Pensions and Labor Committee, said he “would not have any problems at all” with proposals formalizing or mandating divestment from Russia. But he also suggested Russia’s actions could be applied to a current law he authored — one requiring divestment from counties found to be sponsoring terrorism.

Also a topic of discussion at the recent meeting was environmental, social and governance investing — the risk-management framework at the center of another culture war roiling in Indiana.

Indiana Attorney General Todd Rokita, a Republican, issued an advisory opinion in September calling out the system, writing that the “outside investment firms hired to manage Indiana’s investments threaten to erode this financial stability.”

Davis assured lawmakers last month that the system “wants to defer to the democratic process and will comply with law.” The external managers, he said, “need to invest those assets solely in the benefit of our members, and so they need to be focused on financial returns, not social issues.”

That message hasn’t made its way up: Indiana House Speaker Todd Huston told reporters last week that he wanted the state’s pension fund managers to focus on “return on investment, and not on energy and social policies.”

He said that could include “a variety of different things,” such as politically motivated decisions to divest from other countries. Indiana has already divested what it can from Russia-related entities, and some lawmakers appeared skeptical of the system’s investments in China-related entities.

The system already complies state regulations like Niezgodski’s terror-sponsoring countries divestment requirement, along with mandatory divestment from investments in Sudan and in anti-Israeli companies.

But some, like Rep. Chris Judy, R-Fort Wayne, expressed interest in going further, asking Davis about the feasibility of getting out of China-related investments and the performance of those stocks. Davis said the system monitors those assets and holds its managers accountable on their investment decisions, though he didn’t have specific performance numbers on the spot.

Huston on Tuesday didn’t specifically answer how Indiana would avoid the same consequences as Texas, which passed its own anti-ESG investment law in 2021. Researchers estimate that Texan entities will pay an additional $303-532 million in interest due to decreased bond competition following the ESG prohibition.

House Ways and Means Chairman Jeff Thompson was noncommittal on bills at the intersection of finance and social issues.

“You may see some filed,” he told the Capital Chronicle. “But again, what do we do with that? I’m not sure at this point. There’s so many unknowns.”