FORT WAYNE, Ind. (WOWO) – It has been one year since we lost the legendary Fort Wayne radio icon Charly Butcher.

Today, we remember and honor Charly’s life, commitment to radio and the impact he left on both Fort Wayne and the WOWO community.

Mayor Tom Henry issued a proclamation of behalf of the Summit City saying from this day forward, August 15th, in the city of Fort Wayne, it will be known as the day we “Honor the Life and Legacy of Broadcasting Icon Charly Butcher.”

Allen County Commissioner Nelson Peters also issued a resolution on behalf of the Allen County Board of Commissioners honoring the memory of Charly Butcher. The resolution encourages that on this occasion, the first anniversary of Charly’s passing, citizens come together to express their appreciation for Charly’s devotion to his work, his family and his community.

You can see both the proclamation and resolution below: 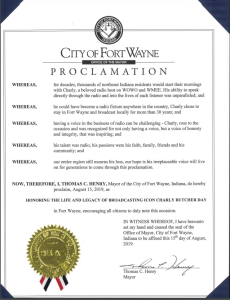 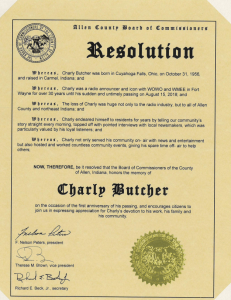 In addition to the above honors, WOWO’s Market Manager, Jim Allegier, has announced a Charly Butcher Scholarship Fund.

Every Spring WOWO will raise funds to be distributed, by the CBSF board, to eligible students seeking degrees within the fields of broadcasting or education. Charly was not only a big supporter of broadcast communications, but also a big supporter of public education. The hope is the fund will one day turn into a foundation so his legacy will live on for decades to come.

If you missed the Charly Butcher Memorial Show, you can listen to the entire hour-long special below:

The WOWO News staff also worked on this video as a way to pay homage to our friend and colleague, who will always be missed.