ANGOLA, Ind. (WOWO): A Fort Wayne man was arrested Monday after police say he crashed into the Angola City Monument. 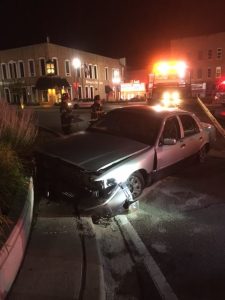 Police attempted to pull over the car, but it didn’t stop. Moreno kept driving until he struck a roundabout and crashed into a planter box on the Angola City Monument.

He was hospitalized. When he was cleared he was sent to Steuben County Jail.