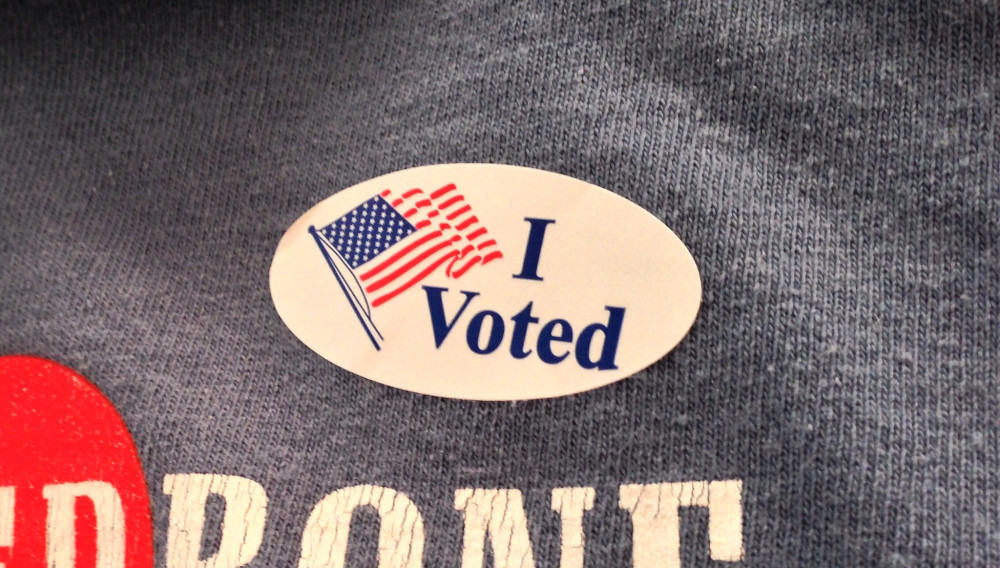 (WOWO/AP): It’s Nov. 8, which means Election Day is finally here. Hoosiers will hopefully have a new president, governor and senator by the end of the night.

Voters can stay up-to-date by listening to WOWO.  Live election coverage will start when the polls close at 6 p.m. Coverage will continue until 1 a.m or until all the results are in.

Below is a live election map that will be updated as states are called.

.@mike_pence: “We will have the privilege to serve as your vice president of the United States of America.” pic.twitter.com/7xZzRN8F67

Trump: "I just received a call from Secretary Clinton. She congratulated us – it's about us… and I congratulated her & her family." pic.twitter.com/Zj7vHbPcgD

Donald Trump to speak soon at the HQ at the Hilton Midtown in New York City.  Hillary Clinton will not speak tonight.

John Podesta addressed the crowd and said Hillary Clinton is not done yet, telling the crowd to go home and check back tomorrow.

.@johnpodesta: “We are so proud of her. She has done an amazing job and she is not done yet.” #ElectionNight #FoxNews2016 pic.twitter.com/YzrXdv1YTC

BREAKING: Republicans will retain control of Senate after win in Pennsylvania if they hold Louisiana, Alaska as expected.

Indiana voters have approved a constitutional amendment to protect the right to hunt and fish.

The amendment states that the right to hunt, fish, and harvest wildlife shall be forever preserved for the public good, subject only to laws prescribed by the General Assembly. Hunting and fishing are popular in Indiana. The U.S. Fish and Wildlife Service estimates Indiana has about 392,000 hunters and about 801,000 anglers.

The amendment’s author, Republican Sen. Brent Steele, says he wants to ensure those rights are not endangered by animal rights groups. The measure was backed by the National Rifle Association.

The Humane Society of the United States said the amendment was unnecessary because those rights weren’t under attack.

Indiana joins 19 other states that had previously adopted constitutional amendments to protect those rights.

The two men sought to succeed Attorney General Greg Zoeller, who did not seek a third term after losing May’s Republican primary for a U.S. House seat.

Republicans have held the statewide post since 2001. The duties of the state attorney general’s office include defending Indiana when it’s sued, serving as the legal adviser to state agencies and approving state contracts.

Hill will be the first African-American man to serve as Indiana’s attorney general.
Two black women, both Democrats, have previously held the post.

Trump was awarded Texas’ 38 electoral votes, the second-largest prize on the map. He also won six from Kansas, four from his victories in Nebraska and three apiece from Wyoming, North Dakota and South Dakota.

Clinton was awarded 20 from Illinois and 29 from New York, the state both candidates call home. Trump had declared he would try to win New York but never mounted a serious effort there.

The Republican nominee now has 123 electoral votes. Clinton has 97.

Todd Young beats Evan Bayh and is elected to the be the new Indiana Senator.

Republican Donald Trump has won the presidential contest in Indiana, with home-state Gov. Mike Pence on the ticket as his running mate.

Neither candidate paid much attention to Indiana during the campaign. Trump essentially clinched the Republican nomination with his victory in Indiana’s May primary.

Trump was heavily favored to win Indiana even before he picked Pence as his vice presidential candidate just before the GOP convention in July.

State election officials say nearly 900,000 Indiana voters cast early ballots for Tuesday’s election and that could mean a late night in some counties tallying those ballots.

Indiana Election Division co-director Brad King says that as Monday’s deadline for early voting, county clerks had received more than 896,000 ballots cast in person and through other methods.

King says mailed-in absentee ballots and overseas ballots from members of the military and Americans working overseas are still arriving at clerk’s offices.

Election officials say some of Indiana’s polling places are seeing long lines and a few equipment glitches but Election Day has generally gone smoothly across the state.

Indiana Election Division co-director Angie Nussmeyer says long lines are an issue in several Indiana counties but that was expected because of strong voter interest in Tuesday’s election.

Valerie Warycha, the spokeswoman for the Indiana Secretary of State’s office, says she’s heard of long lines at polling places “but nothing out of the ordinary.”

Voters in Indiana have just a half hour to head to the polls. If voters are in line by 6 p.m., they will be able to vote.

A software glitch that indicated scores of voters showing up at the polls had already cast ballots has led to voting delays in one of North Carolina’s most heavily Democratic counties.

North Carolina Board of Elections lawyer Josh Lawson says officials in Durham County quickly concluded that there was a problem with their electronic poll books and began relying on paper rolls to confirm voter registrations. Attempts to vote twice are rare.

Dr. Gerard Lameiro joined Pat Miller. He said Hillary is in for some trouble after the election.

President Barack Obama is hitting the radio airwaves to encourage Americans to go to the polls to vote for Hillary Clinton.

The White House said Obama gave Election Day interviews to six radio stations that target listeners in Orlando, Detroit and Philadelphia. The cities are in states where the race is believed to be close between Clinton and Republican Donald Trump.

Voters can now see issues and wait times in real time on just one map.

On this Election Day, Donald Trump is continuing to raise doubts about the integrity of the U.S. election system.

As he cast his own ballot for president, Trump refused to say whether he would concede defeat if he loses. And he voiced additional concerns about voter fraud. Even as he offered an optimistic outlook about his chances, Trump said only, “We’ll see what happens,” when he was asked what he would do if Hillary Clinton is projected as the winner.

Claims of possible fraud — not backed up by evidence — have become a regular part of Trump’s warnings of a “rigged election.”

Seeking to become the first woman to be elected U.S. president, Hillary Clinton cast her ballot Tuesday and settled down to wait for the country to make its choice.

The Democratic nominee and her husband, former President Bill Clinton, voted at an elementary school near their home in suburban New York before greeting supporters waiting for her outside.

“It is the most humbling feeling,” she said of voting for herself for president. “I know how much responsibility goes with this.”

Eric Trump may have broken New York state law by tweeting a photo of his completed ballot.

The second son of Donald Trump tweeted a photo of a ballot with the oval over his father’s name filled in on today. The tweet said “It is an incredible honor to vote for my father! He will do such a great job for the U.S.A!” An 1890 New York law bans voters from showing marked election ballots to others. A federal judge ruled last week that the law applies to social media posts.

Some voters are going from the polls to the cemetery in upstate New York in order to pay respect to women’s suffragist leader Susan B. Anthony.

It was a quick trip to the voting booth for Donald Trump’s running mate on Tuesday.

Indiana Governor Mike Pence was joined by his wife, Karen, as they voted in Indianapolis. The couple encountered no lines and spent about five minutes filling out their ballots.

There are no lines at most polling places in Fort Wayne.

Voting machines are down in Fairfield Townships. Techs are on the way to fix the problem. Expect a long wait.

Voters at the American Legion Post 330 in New Haven are experiencing a 30 minute wait.

Voting is underway in Allen County and already several Hoosiers are reporting long lines at their precincts.

Republican presidential nominee Donald Trump is favored to win Indiana’s 11 electoral votes but races for governor and U.S. Senate are expected to be close.

Polls are opening across Indiana as voters cast ballots in national, state and local contests.

In Indiana on Tuesday, voters will decide who will replace Republican Gov. Mike Pence, who is the vice presidential candidate on the national ballot with Donald Trump. Democrat John Gregg is facing off against Lt. Gov. Eric Holcomb.

In the U.S. Senate race, Democrat Evan Bayh is trying to return to the Senate seat he gave up six years ago citing Washington partisanship and gridlock. He is battling Republican Congressman Todd Young for the seat being vacated by Sen. Dan Coats.

Indiana voters will also decide whether Democrats have a bigger stake in the General Assembly.