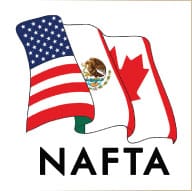 North American Free Trade Agreement negotiations between the U.S. and Canada resume this week as both sides attempt to reach a deal by the end of the month. Canada’s Foreign Minister Chrystia Freeland arrived in Washington, DC Tuesday ahead of scheduled talks with U.S. Trade Representative Robert Lighthizer. The two sides must agree to a “handshake” agreement by the end of the month for the deal to stand a chance to be finalized under the current leadership in Mexico, as a new President takes office later this year. The precise cutoff point for a handshake agreement is unclear, but a Canadian official believes it’s Thursday, according to Bloomberg News. Dairy is the biggest policy issue between the U.S. and Canada and trade experts previously said that those talks are “highly technical” and take time, but a deal could still come this week. Canada does appear to offer some concessions on dairy in exchange to preserve the dispute panels under Chapter 19 of the current deal.